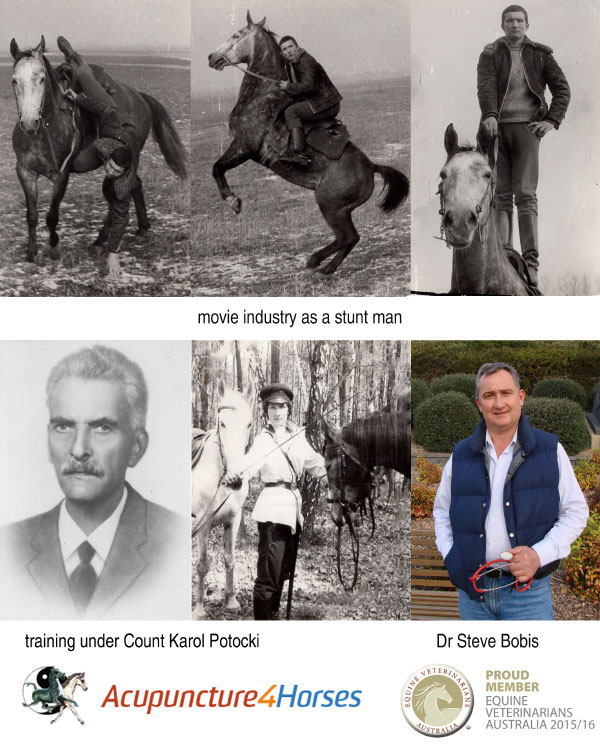 Steve Bobis has over 25 years’ experience as an equine practitioner in Australia and overseas.

Growing up in Poland, he learned horse riding, vaulting and horsemanship under the watchful eye of Count Karol Potocki – aristocrat, horse breeder, cavalry man, POW and World War II hero. His skills launched him into a career in the local movie industry as a stunt man, until it was cut short by a bad fall and subsequent chronic leg injury. The process of treating and curing that injury initiated a lifelong interest in acupuncture and herbalism, which he has pursued clinically since graduating in veterinary studies from Murdoch University, WA.

Since then, he has been studying herbal medicine and acupuncture, drawing on sources from European Monks’ Monasteries, Traditional Chinese Medicine, and later, Australian Aborigines bush medicine and postgraduate studies.

An internationally certified veterinary acupuncturist (IVAS) since 1992, he is also the author of the renowned Practical Acupuncture for Horses. He has also been a speaker on equine acupuncture which has included the Australian Veterinary Association Conference in 1998. He has taught final year veterinary students at the University of Queensland in equine medical procedures and lameness examination and lectured on acupuncture and equine holistic health in Argentina, Iran, Saudi Arabia and Uruguay.

Steve operated his first holistic veterinary practice in Evatt from 1990 and 2002, serving equine athletes in Canberra and surrounding areas. He officiated at the Canberra and Queanbeyan race tracks and at the Show Jumping Word Championship.

Experienced as a veterinary consultant to the King Abdulazaiz Arabian Horse Center, Saudi Arabia, and speaker that includes the Aspahan Horse Festival in Iran.

Steve is now back in Australia and applying his skills and experience to horse owners in Canberra and surrounding areas.